The picturesque city of Venice is a destination well-known for its architectural and cultural allure. This unique lifestyle attracted roughly 26 to 30 million tourists annually prior to COVID-19. For decades, the number of tourist beds available in Italy consistently increased. This roughly 16% annual climb did not come without consequences. From 2000 to 2020, the resident population dropped from 76,007 to 51,550. As of 2019, there were more tourist beds available than residents. As a result, UNESCO gave Venice a deadline of 2021 to mitigate the environmental effects of tourism on the city or risk officially adding it to the endangered list.

However, these trends rapidly changed when COVID19 spread across the world. In February of 2020 Venice was placed under lockdown to combat the influx of victims that plagued the nation. As a means to remedy the damage to tourism and local businesses, the SmartDest Project had chosen to sponsor a proposal from SerenDPT that focuses on solutions to issues of dependency and deterioration of Venetian. The goal was to analyze tourism and the effects that it had on the economy, environment and culture in Venice as well as to create policy to usher in sustainable tourism. In doing this a team of VPC students form the Worcester Polytechnic institute worked to supply SerenDPT with pre-COVID socioeconomic trends regarding tourism; to aid in the development of a tool to automatically collect real-time tourism data; and engage with stakeholders in tourism and plan an event for stakeholders to meet and discuss sustainable tourism.

The individual stakeholders all have problems specific to their discipline and with varying severity. In order to help these stakeholders, develop a more sustainable tourist experience in Venice, the first passage was to analyze pre-COVID socioeconomic data. The research proved the fragility of the tourism industry, making it evident that it needed to be monitored. This led the team to renovate and repurpose the Venice Dashboard. Designing the new dashboard moved it from a tourist focused program to a researcher and policy maker oriented one. The new design presents data found from websites and API’s (application programming interface) which will be displayed in real time. The data will be displayed in various forms such as interactive maps, bar and line graphs and charts. In doing this the functionality of the website increases, as researchers will have a one stop spot for all socio-economic tourist data.

As per the SmartDest grant, they organized multiple stakeholder events to be conducted in Venice with the goal of discussing tourist related issues to help bring officials and administrators to make policy. The events have been organized into 5 groups each of which will have members from associations discussing issues in their industry: hospitality, tourism, transportation, housing and commerce association. We hope that this work will be beneficial to the grants goal of upgrading pan-European policy, influencing the issues of mobilization and exclusion brought on by tourism.

Want to know more about our project? Check our website and learn about tourism in Venice on a real-time basis! 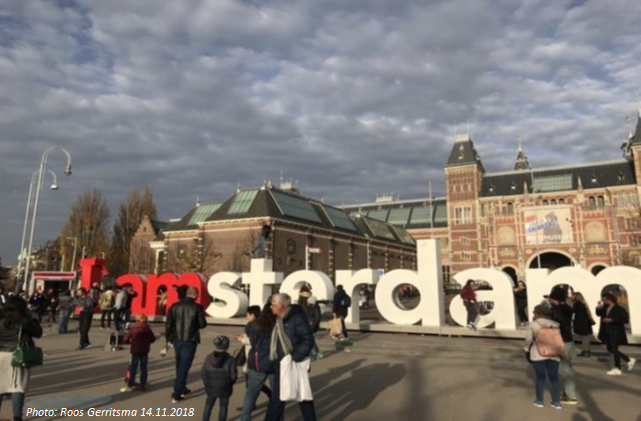 Last month we completed a report examining the socio-economic and political context of Amsterdam, Barcelona, Jerusalem and Venice. Crucial events and occurrences were identified to understand how tourism and related issues developed in the cities over the past two decades. This analysis will constitute the foundation for our future empirical research in SmartDest.

A common element stood out across the cities, when comparing the four case studies. At the turn of the century, tourism has been framed and debated predominantly in a positive way stressing economic advantages and infrastructural developments. However, in each city there appears to be a critical juncture or turning point, where the public and political discourse on urban tourism shifted. Economic benefits were no longer able to offset the issues engendered by mass tourism. To name some of these key events:

-In Amsterdam, the IAmsterdam sign a former symbol of opening the city to tourism, was removed in 2018 indicating the end of tourism growth-oriented policies.

-In Barcelona, public opinion on tourism tipped over in 2015 following the election of a radical left candidate who openly tackled the problem of overtourism in the city.

-In Jerusalem and Venice, it is difficult to pin down a turning point in the discourse as both cities are characterised by an interwoven political and economic context with countless stakeholders involved. However, the findings show how inhabitants increasingly mobilise against tourism impacts.

Although representing only the tip of the iceberg, these events express a fundamental process of change in the discourse. Critical voices and initiatives existed before the turning point, but they appeared to be drowned out by pro-tourism stakeholders.

In the next step, we will further examine these issues and consider the effects of the current crisis onto tourism. In early Spring 2021, we will dig deeper in public debates on tourism with a detailed discourse analysis.

The uneven relationship of short-term rental platforms like Airbnb with cities. A kind tourism that extracts local resources for the economic benefits of few, contributes to social exclusion of many.

A report written by Murray Cox, the data activist founder of Inside Airbnb, and Kenneth Haar, of Corporate Europe Observatory, provides insights on how short-term rental platforms have become one of the biggest exclusionary drivers in large tourist cities.

Report’s Highlights. Platforms refuse to cooperate with cities, fail to self-regulate and to comply with regulations to protect affordable housing for residents.  The report also provides insight on what the forthcoming Digital Service Act should deliver to support the legal capacity of cities to protect housing.

How Airbnb fails cities. In Amsterdam, Airbnb withdrew the ability to enforce a 60 days cap after the city tightened regulations; in Barcelona, Airbnb provides data but the 60-70% of the addresses of property on offer are missing or incorrect; in Berlin, the 80% of Airbnb listings are still illegal and the platforms refuse to provide data; in Paris, the 60% of Airbnb listings are illegal; 85% active listings are illegal; in Vienna, Airbnb refuses to remove listings offering hospitality in social housing.

What unequal consequences. Concretely, the report shows how many apartments short-term rental practices ended up extracting from the cities’ housing market and which effects that had on access to housing. In in some neighbourhoods of Amsterdam, this amounts to 1 out of 9 units rented on Airbnb; in Paris, 15,000-25,000 apartments; in Prague, 15.000 apartments; and in New York between 20,000 and 25,000. In Barcelona, the rise of Airbnb in areas of high intensity have determined a 7% increase of rents and a 19% increase of and property prices.

What is the best scenario for the new EU’s Digital Service Act. Exclude the digital platforms like Airbnb or Über from this act following decisions by the European Court of Justice in December 2017.

How could the Digital Service Act favour the right to the city. 1) Enforce the cession of disaggregated data to planning authorities; 2) Obligation to provide valid and certified data; 3) Acceptance of authorisation schemes for both hosts and platforms; 4) Full cooperation on the sanctioning of illegal listings; 5) Full liability where platforms operate. 6) No obstruction from the Commission in urban regulation of platform economy when it comes to protect fairly access to urban assets, like for instance housing.

Subscribe to our news alert and stakeholders database at this link 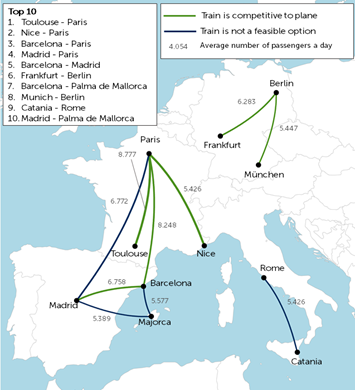 Since March 2020, the European airline industry has been heavily challenged. According to the IATA the demand in Europe has dropped over 70% compared to 2019 and the current losses for 2020 are estimated at $26.9 billion. According to IATA Chair, Alexandre de Juniac, the financial support of government was crucial to prevent several bankruptcies. IATA expects European airlines to have highrer revenues at the end of 2021 in the scenario of a widespread available vaccine.

European airlines rely heavily on international markets for revenue since there is tough competition on the short-haul European markets. According to Air France-KLM’s annual reports, in 2018 Air France suffered a € 189 million loss in the domestic network, after which it was decided to reduce capacity on domestic flights by 15% by the end of 2021. In the Lufthansa annual report of 2019, yields fell by 4.4% mainly due to the tough competition in the Germany and Austria markets. Lufthansa felt the intense competition and over-capacity on the short-haul European routes as well.

During the first months of the pandemic, the European Commission decided that airlines no longer must use 80% of their slots to secure slots up. Accordingly, airlines do not have to fly with almost empty aircrafts just to conserve their slots. This decision has been extended up to March 2021. But what to do with the slot release when networks are being reinstated?

Looking at the top 10 aviation markets between cities in Europe with the highest number of passengers in 2018, we observe 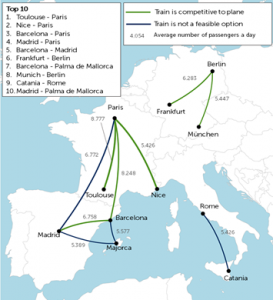 a lot of domestic movements.  There are only 2 intra-EU routes, while 8 out of 10 routes serve domestic markets. A train journey is a realistic option for 6 out of 10 flight routes. A realistic option means that the average duration of a train journey does not exceed 1.5 times the flight. The Madrid – Barcelona route is still heavily served by plane (6,758 daily passengers on average), while the train connection is faster or comparable to the plane.

The top two routes are both in France, the number one being the Paris – Toulouse route. In 2018, about 60 flights a day were operated on this route compared to 23 train connections.

Estimates show that, excluding car, 14,000 people travel daily between Paris and Toulouse. The load factor of an aircraft on this route is about 80% and that of a French TGV train around 67%. About 28% of the total capacity was unused in 2018 and for the time being there is enough space to travel more by train and less by plane. Another example is the Berlin-Frankfurt route. It has an estimated capacity of 17,475 travelers, while only an estimated 12,000 people travel daily between the two cities (excluding motorists). This implies an underutilization of 31%. The load factor of an aircraft is about 75% on this route and for DB long-distance trains around 55%.

According to the basics of demand and supply, at perfect competition an equilibrium will be set, and overcapacity will disappear. However, Air France has lost about € 717 million on domestic routes since 2013 suggesting that an equilibrium has never been reached.

If countries cannot manage to reduce the high number of passengers and capacity on domestic air markets themselves, how should this be executed in a European context? In any case, let the current tumble as a result of the COVID-19 outbreak could be a turning point in how EU member states deal with domestic and intra-European air traffic. Let Ursula von Leyen and Frans Timmermans return airport slots, which are now protected, only to those flights that serve markets for which the train is not a realistic alternative. Take this opportunity an give the train a prominent role in the future of Europe.

A summary of this article was published in Het Financieel Dagblad 24th of May 2020.