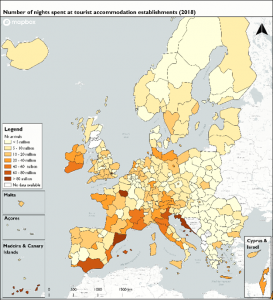 The SMARTDEST report published in September 2020 is a preliminary exploration of the dimension of tourism and related mobilities at regional level across the EU territory in the period 2008-2018 and of regional trends of social unbalances across the EU. To these aims, a series of indicators to describe key dimensions of mobilities and social unbalances were selected by the researchers across multiple sources (including Eurostat, Labor Force Survey, AirDNA). These have been mapped on the EU geography and discussed, and are being collected in a work-in-progress database, organised at regional (NUTS2) level, and available at https://doi.org/10.5281/zenodo.4058290 in its preliminary version. Although the analysis does not include 2020 trends, thus not focusing on the impact of 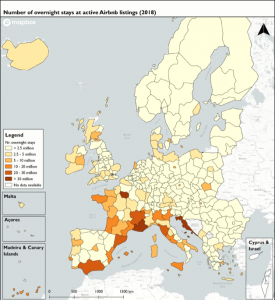 Covid-19 pandemic on mobilities and social unbalances, several lessons relevant to the post-Covid-19 recovery can be learnt.

A collection of 53 maps was produced. The regional (NUTS2) scale of this analysis was dictated by data availability, as the majority of the related statistics are only published or reliable at this scale. As a consequence, this collection of maps gives a preliminary overview of the geographical trends, without focusing on territorial nuances. Nevertheless, urban trends of tourism and mobilities can already be observed, since NUTS2 regions including large cities generally correspond with their metropolitan dimension.

Here we summarise the main tourism trends looking at tourism stays and their evolution over time, tourism pressure and stress, and the international character of destinations. 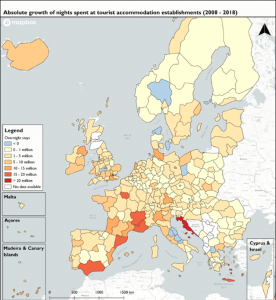 Tourism mobilities in absolute numbers in 2018 (Figure 1) were more intense in coastal regions, particularly in the (Western) Mediterranean arc; in mountain regions, especially in the Alpine arc; in highly urbanised regions, especially capital city regions. Trends of Short-Term Rentals (STR), a form of tourist accommodation that is not fully accounted for in official statistics, mirror the ‘official’ statistics on arrivals (Figure 2). STR stays are highest in coastal regions and urban regions, especially in the south of Europe, France, the UK, Iceland, and Denmark. These figures are possibly also influenced by national regimes of regulation. 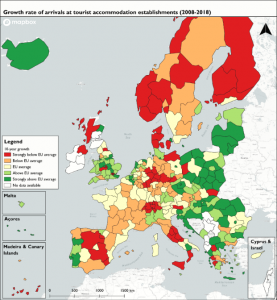 European regions in the period 2008-2018, with very few exceptions (Figure 3). In absolute terms, it is especially Southern and Mediterranean regions, islands, and

capital regions that have seen the largest growth of arrivals at tourism accommodation establishments. The only regions that had a decrease of the number of tourism stays are the regions in light blue.

In relative terms, the picture presented offers a further piece of the puzzle (Figure 4): while the most mature destination regions continued to grow, there is also a process of ‘catching up’ of regions that were less attractive and that grew substantially in the 10-year period. The regions that are strongly above the European average are mostly located in Eastern Europe, the Coastal region of Croatia, Portugal, the UK, Benelux, and Iceland. Cities and urbanized (coastal) regions have also had a sustained dynamic of growth over the 2008-2018 decade. Among the capital regions, Amsterdam, Berlin, Brussels, Lisbon stand out. 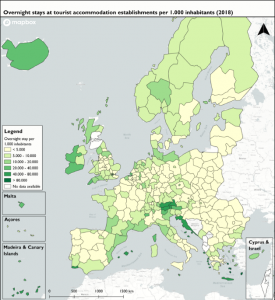 Tourism stress and pressure (overnight stays in relation to space or to the resident population respectively) have also increased over the reference period almost anywhere in Europe. In 2018, the number of overnight stays in tourist accommodation establishments in relation to the resident population (Figure 5) was especially high the East Alpine arc, coastal Croatia, Mediterranean island regions, capital city regions, coastal regions, and some of the less urbanised coastal and rural regions in Northern Europe.

The analysis also highlighted that some regions tend to be more reliant on international markets, 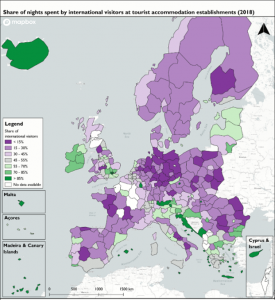 having a large share of international visitors. These are large and smaller islands, border regions, but also Croatia, Baltic and Italian regions, among others (Figure 6). In addition, Iceland, the UK, Portugal, and Greece have become more reliant on international tourists since 2008.

We identified the regions in Europe where pre-covid tourism was especially strong and where it was growing the most. These tend to be Mediterranean and Southern Europe regions, islands, and urban and capital regions. Subsequent analyses took a step forward and identified four typologies that illustrate different forms and degrees of attractiveness for tourists and related mobilities, based on the collection of maps presented here [link to https://smartdest.eu/a-typology-of-eu-tourist-regions-facing-social-inclusion-issues/ ].